How to Root Pantech Vega No 6 Without Computer (Root APK)

HOW TO ROOT ANDROID

Nowadays, there are virous brands of numerous smartphones, and the upgrades of phones and tablets become faster and faster. However, users may own the Android device more than one and unwilling to abandon the old one. Some users who stick to their old phones and don't want to change a new one. In that, rooting your android device will be a good chance to turn the old OS to the newest one in order to improve some functions the old one doesn't have. KingoRoot APK is the best choice for rooting Android devices. It is a one click root tool for free.

Pantech Vega No 6 was released on February 2013. Pantech Vega No 6 is powered by a removable Li-ion3140 mAh battery running Android V4.1.2 ( Jelly Bean ). The internal memory of this smartphone has 32GB and ships with a microSD up to 256GB. Compared to some new Android phones with new OS, Pantech Vega No 6 may seem to behind the times, but this can't stop some user to love them and stick to them.

After rooting your Vega No 6 with KingoRoot apk, you can open a world of possibility. Rooting enables you to flash a custom ROM, so that you will easy to install the latest and greatest OS version that compatible with your Vega No 6 without waiting. After rooting, you can backup system data, save the battery life,  customize your device, uninstall bloatwares and so on.

Steps of Rooting Pantech Vega No 6 via KingoRoot APK

The download will be automatically started to your Android. Find it in "Download" on your phone. If Chrome has warned you about KingoRoot apk, click "OK" to proceed.

Step 2: install the KingoRoot APK and launch it

After KingoRoot APK download is complete, install the apk file.

*Note: you may receive this Install block message. Take the following steps: 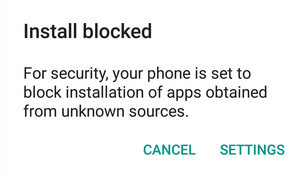 Your Vega No 6 may only accept app installation coming from its native app store, like Google Play or Samsung Apps. The apk file of KingoRoot is directly downloaded from the server of Kingo and will not be able to install on your device unless you allow installing from "Unknow sources".

KingoRoot is an exploit-based root tool. KingoRoot exploits system vulnerabilities in order that your device can be rooted, which will be considered by Google or Manufacturers as a malicious act. But it is your choice to choose, to root or not to root. On kingo's behalf, the only thing we can do is that to make sure of our integrity and leave the choice to you.

Make sure the network is stable when rooting with KingoRoot. Because the rooting scripts are stored in Kingo's server. Otherwise, KingoRoot apk will fail to root your device.

You may want to try it several times because KingoRoot apk will only download one script at a time. Running different scripts may deliver different results.

MORE TO SAY: After doing all above, if KingoRoot APK still failed to root your Pantech Vega No 6, hope you have a try on KingoRoot Android (PC Version), which has a much higher success rate for technical reasons.How to root any Android device of any version with KingoRoot PC Version?